Chateraise may be familiar to those in the Klang valley and Penang, but so far in Ipoh, this is a new concept.

Because the pastries, smoothies, ice-cream, and cakes are imported all the way from Japan!

Which begs the question, is it worth paying a visit to Chateraise Patisserie in Ipoh Parade to pick up some Japanese treats?

Chateraise began in 1954. Back then, the signature pastry was amataro which consisted of  imagawa-yaki (Japanese pancake) with a sweet red bean paste filling.

They’ve since expanded a lot. With almost 500 branches in Japan, their reach continues outside of Japan with 24 worldwide stores including Singapore, Taiwan, Indonesia and China.

All of their Japanese and Western selection of desserts and pastries are created with fresh ingredients from Japanese farms.

The goods are made in their factories (they have 3 – the Nakamichi Factory, Toyotomi Factory, and Hakushu Factory) to be exported all over the world using what they refer to as Flash Freeze technology.

Additionally, they utilize many different technologies to retain the freshness of their products:

The maiden Ipoh branch of Chateraise Patisserie is in Ipoh Parade Mall.

And it’s the first thing you will see after you come up the escalators from Jaya Grocer or the basement parking lot.

Compared to other bakeries in Ipoh, this Chateraise Patisserie branch in Ipoh Parade puts a lot of effort in decoration and presentation:

They have many fake versions of their goods scattered around the shop – some of these seriously look good enough to eat. We figure that only the cakes at the display counter are real.

Moreover, the staff wear stylish uniforms complete with berets (more for style than for hygienic reasons, we think). Even the plastic chips for the numbering system are appealing.

The shop is prettily lit and every corner is aesthetically pleasing. There are, however, no seats for customers to sit down and enjoy the pastries on site.

We only spotted one table at the back and that sits up to 4 people.

Because it was the first day of opening, staff was very busy taking and packing orders. Most of them do their job in a brisk and focused manner.

There was however, one chap who made us feel like we were taking too long to choose our orders even though the people in front of us were clearly not done choosing their cakes either.

His body language clearly suggested so and he looked exasperated/ tired. It was an hour before closing time so we didn’t take it personally.

Other than this, we don’t have any comments on the service at Chateraise Patisserie in Ipoh Parade.

There are quite a lot of different pastries or cakes to choose from (many are just different flavors), and these are enough to make you hesitate on what to get.

Of pastries, they have leaf biscuits, Japanese pancakes, and their signature double-cream puffs in different flavors (e.g., matcha, chocolate-orange, etc).

They have beautiful fruit cakes, mille crepe cakes, and cheesecakes too and these have labels to tell you what layers are inside the cakes!

Other than cakes, there are smoothies and fruit jellies for sale.

And fridges at the other side of the bakery contain many different Japanese ice creams and frozen desserts.

We were surprised that some of the pastries cost RM6 to RM8 a piece though!

The cream puffs sell for RM5.40 but we don’t think they’re worth getting unless you don’t mind slightly soggy skins.

Ice cream sells for about RM3 to RM10 depending on what you pick.

It’s hard to be sure that the goods at Chateraise Patisserie are all really made in Japan. Although they do have a number of large fridges behind the counter to store the food – the cream puffs are already sealed in plastic packaging.

We did spot ovens at the back of the shop and the remains of topping preparation by the counter too. But we assume the ovens are for the puff pastry and that the toppings are for the fruit cakes.

Some of the pastries are a little too expensive to us, but from the cakes and cream puffs that we have tried so far, the taste is pleasant (doesn’t taste of artificial flavoring) and delicately sweet.

Pricing all-round is higher than average (fair if they really are from Japan) but if you like Japanese pastries and cakes, you can give Chateraise Patisserie in Ipoh Parade a go! Hanz & Jane is not where you expect to find a hipster café as it’s in a quiet area in Bercham. But this fairly new café in Ipoh will make… Sip on artisan coffee at Cold Blue Specialty Coffee in Ipoh. This hidden café is a must-try for coffee lovers. It’s not bad on the eyes too! What else is… Nam Chau White Coffee (or Nam Chau Restaurant or Restoran Nam Chau if you refer to Google Maps) on Market Lane is walking distance from Concubine Lane. Their most popular… 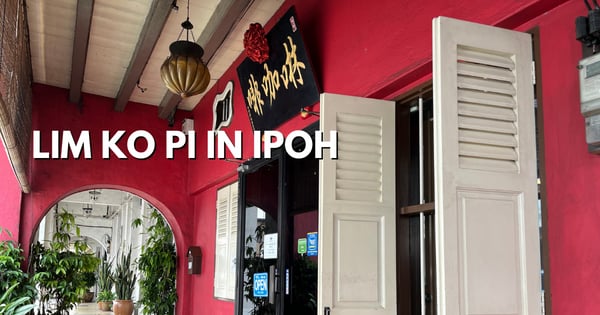 Fancy sitting in a French café but in Ipoh? Chloe Co café is new in the highly competitive café scene in Ipoh. It opens for brunch at 11:30am and closes… Here is a list of 17 best cafes at Ipoh 2022 (updated) to visit if you are traveling to Ipoh or just passing through! Fear not, all of these cafes…